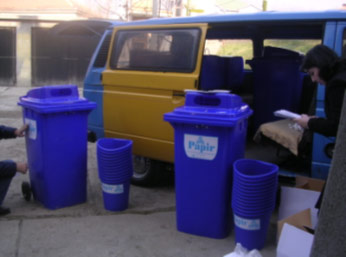 Let’s Recycle – Being an Example
The first step in separated, organized collecting of secondary raw in Tuzla Canton and wider was with project “Recycle – be example”. This step is really important for new access to the waste problem and secondary raw.

Monitoring that we have done showed that 2500 employers and 1500 pupils are included in separated paper collecting. In more than 80% of organizations, project is sustainable.

After distribution of paper-cans and containers we organized press conference, with 8 media-houses. Through the whole time of the project implementation, we have presented the project in media in Tuzla Canton. Presentations were very good for success and contributed to larger interest of firms and organizations.

We have formed list of firms/organizations and municipalities that have interest to involve in project.

With support of other donors, and with this model, we organized separated paper collecting in 3 schools, 9 shops and 30 families in two boroughs in Lukavac municipality, more.

Interest for old paper, and concurrency were increased between companies that have bought this secondary raw.

We presented the project on national level through activities in network of NGOs (Eko-network-BIH, DEF, Refer Group), and there are some indications that project could be implemented in other parts of Bosnia and Herzegovina.

We are thankful to our donors for support on this project, because the project implementation and achieving wanted results gave us a great pleasure.

The project helped a lot in process of organized separated paper collecting and other secondary raw and this is the good base for new projects from this area.

Good results in the project are contribution for good image of The Centre for Ecology and Energy in Bosnia and Herzegovina and wider.